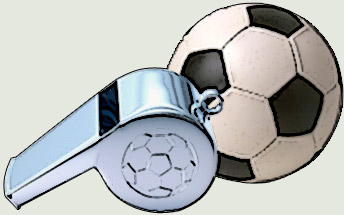 Soccer rules and regulations are enforced to keep the game clean, with less stoppages, and more action on the soccer field.


1. Soccer Rules and Regulations - The Field

Official soccer rules state that any soccer field used for competition has to be between 90 and 120 Meters long, and 45 to 90 meters wide.

The field has to have a rectangular shape with length longer than the width.

Each soccer goal is measured 7.32 meters long and 2.44 meters high.

Diameter of the center circle is 18.30 meters.

Distance between the penalty spot and goal line is 11 meters.

2. Soccer Rules and Regulations - The Ball

Official soccer rules require the ball to be between 68 and 70 centimeters in circumference.

Soccer ball tends to be made out of leather or other similar material.

3. Soccer Rules and Regulations - The Number of Players

Official soccer rules allow each team to have 10 outfield players and 1 goalkeeper.

Goalkeeper has to wear a different color jersey so he/she can be easily distinguished.

Each team is allowed 7 substitute players on the bench.

During any competitive match, use of 3 substitutions maximum is allowed.

Player substituted will not be able to come back into the game.

Minimum number of players required to start the game, or to keep the game going, is 7 outfield players and a goalkeeper.

Official soccer rules call for every player to wear the same color jersey, shorts and socks, matching the rest of their team.

Each player is required to wear shinguard's and soccer shoes or cleats.

Any piercings or jewelry have to be taken off or taped up for safety.

5. Soccer Rules and Regulations - The Referee

Soccer Referees are there to keep the game under control.

Center Referee is helped by two linesman referees, and a fourth referee who shows injury time, enforces substitutions and keeps the coaches in their area.

Lately there has been addition of 2 additional referees, one behind each goal to help the Center Referee with close calls on goal and penalty area.

Assistant referees are regarded as two linesman on each half of the field, and on the opposite sides.

Line Referee will help with offside, out of bounds, fouls, goals and any other rule obstruction caught by them.

Linesman will signal the center referee of any obstruction, however it is up to the Center Referee to decide on stopping or letting the game continue.

Two Referees positioned on the end-line of each goal have been a recent addition to some leagues and competitions.

Their job is to make sure that everything happening inside the penalty box during the game is legal, per official soccer rules.

They will also help with close calls on weather the ball crossed the goal line or not.

7. Soccer Rules and Regulations - Duration of the Game

Any official soccer match is played in two 45 minute half's, with 15 minute break in between.

Clock does not stop for any stoppages.

At the end of each half, center referee will add extra time, usually 3-5 minutes to make up for some of the stoppages.

If the game is tied, soccer match can go for additional two 15 minute half's during a knockout type of match, where the winner has to be decided.

If the game is still tied after the extra time, penalties will decide the winner.

8. Soccer Rules and Regulations - Start and Restart of play

Official soccer rules require the play to be started with a kick off from the center, and restarted from the center after every goal conceded and after the halftime break.

When the ball goes out of play on the sidelines, the game is stopped and the player touching the ball last concedes a throw in against his team.

Play is restarted with the opposite team throwing the ball back into play.

Goal kick is awarded when the attacking team touches the ball last, as the ball crosses behind the goal line.

Game is restarted with a kick from the goalkeepers safety box.

If a defender touches the ball last, before the ball crosses the goal line, corner kick will be awarded.

Official soccer rules require the game to be resumed from the side closest to where the ball went out on goal line.

Indirect free kick will be awarded if the ball is picked up by the goalkeeper, after it was deliberately passed to him/her by a teammate.

Indirect free kick can only be shot on goal from the 2nd touch on the ball.

Penalty kick is awarded after a handball or a foul is committed inside the penalty box.

The game is stopped and the attacking player has a chance to score from 11 meters out in a 1vs1 situation against the goalkeeper.

Dropped ball happens when the referee stops the play for a special reason like: injury, defective equipment, or any other external factor.

The game is restarted by the referee dropping the ball in between two players who will in most cases give the ball back to the team that had the possession when the game was stopped.

Official soccer rules state that the soccer ball is in play all throughout the match until it completely leaves the field of play marked by the bounding lines that form a rectangle (soccer field).

Complete circumference of the ball has to go out of bounds for it to be out of play.

When the ball goes out of play, it is restarted by a throw in or a goal kick.

Substitutions will also take place only when the ball goes out of play.

As long as the ball is in play and no infringement of rules are caught by the referee, any player on the field can score goals.

Official soccer rules state that a goal is scored when the whole circumference of the soccer ball crosses the goal line.

Goals can be scored with any part of the body except the arms.

Offside is called by the linesman referee against the attacking player that is in advantage on goal when the ball is last played to him by his teammate.

Being in advantage means that the attacking player will be in a 1 vs 1 situation with the goalkeeper before the ball is played (touched) for a pass towards the attacker.

Offside is restarted with the defending team taking a free kick from where offside infringement was made.

Foul happens when a player unintentionally kicks or trips another player while going for the ball.

Misconduct occurs when a player intentionally kicks, trips, swears, spits or does anything to disrupt the sportsmanship of this sport.

Fouls can only occur when the ball is in play, but Misconduct can happen with the ball out of play.

The referee will decide on a disciplinary action for the player.

Free kick is awarded to a player that was tripped, pushed, kicked or obstructed in any way while in possession of the ball.

Free kick can be taken directly on goal, and the defending wall has to be 9.15 meters from where the ball is placed.

Penalty kick is awarded when an attacking player is fouled inside the penalty box, or the defender handles the ball with his/her hands.

Game is stopped and the referee will point towards the white dot, located 11 meters from the center of the goal.

Every player has to be outside the penalty box when the shot is taken.

It is attacker vs the goalkeeper from 11 meters out.

Once the ball is kicked, it is officially in play and the game continues.

Throw in is awarded when the whole circumference of the ball goes out of play on the sidelines.

Ball is awarded against the player who last touched the ball.

The player taking the throw in has to keep both feet outside of the sideline.

Both feet have to be touching the ground when the ball is thrown and the actual throw must be executed with the ball over the thrower's head.

Soccer game is restarted many times using a goal kick.

Goal kick is awarded to the defending team once the ball goes over the goal line and is last touched by the attacking team.

The ball has to be kicked hard enough to leave the penalty area or the kick will be retaken.

Corner kick happens when the ball crosses the goal line and is last touched by the defender.

Corner kick will be taken as a direct free kick from the corner side, closest to where the ball went out of play.

The ball has to be placed inside the corner arc and the defender has to be 9.15 meters away from the ball.

For more information on soccer rules and regulations, visit FIFA Laws of the Game.