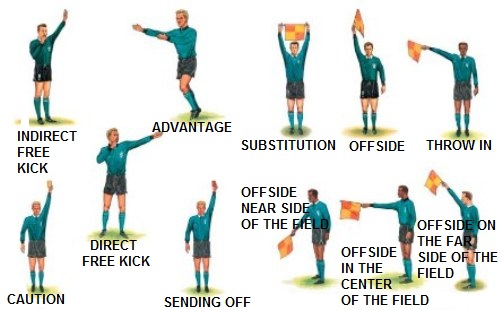 Soccer Referee Signals are used by the Center Referee or the Sideline Referee to communicate what is going on in the game to everyone else on and off the field.

Official soccer match requires 1 Center/Main Referee, and 2 Sideline Assistant Referees located on each half of the field.

Referee signals and information covered here will open your eyes as to how hard it is to referee a soccer game.

Referee is responsible for keeping the game under control, calming down players and trying to keep the game clean and uninterrupted as much as possible.

Referees doesn't have the option of replay like we do at home, they have to call it like they see it.

Part of being human is making mistakes, and the referees make their share of mistakes officiating games from amateur to professional level.

Before the English had organized a set of rules to be followed, there were no officials to keep the game under control.

Rules were simply agreed upon by the teams who played against each other.

Soccer is a very competitive and physically demanding sport, so without the referee to regulate the action, the game would get out of control very often.

Harder tackle or a disputable goal would bring teams into a rectangle fist fight, instead of enjoying the afternoon out playing soccer.

Soccer Referee Signals are used to transfer message of rule infraction to everyone on and off the soccer field. Sideline Referees will use their flags to transmit the message visually.

Tempers can get hot, especially when the players get tired and gasping for air.

Soccer Referee was introduced to keep the game organized, calm and entertaining.

Referees will use different signals to transfer information to everyone else, on and off the field.

Soccer referee signals were introduced with the Laws of the Game, in 1863, and they have not changed since.

Official soccer matches require at least 3 Referees for the game to start.

Center Referee, who will control the game, issue cards and call any game stoppages.

Two Assistant Referees, one on each side of the half field. Their job is to assist the Center Referee with offside calls and any foul play that happens in their eyesight (closer to the sideline).

In Professional Soccer, there is also the 4th Referee, who is in charge of showing Added Time, Handling Substitutions and keeping Coaches calm and in their coaching area.

Central or Main Referee has to follow the action on the field and call any infringement of the official soccer rules.

The central referee has the ammunition of Yellow and Red card in his pocket to keep the players under control.

Yellow card is used for harsh tackles or player attitude.

Second yellow card leads to a Red Card and ejection from the game.

Frequent yellow cards in different games will lead to game suspension as well. Usually 3 yellow cards have the player suspended for 1 game.

Getting a Red Card means an automatic 1 game suspension.

Depending on the severity of the offense, Red Card can lead to one, two, three or more match suspensions.

When the ball is kicked out of bounds, the Assistant Referee will point his flag towards the team that last touched the soccer ball. Soccer ball is awarded to the team on the opposite side of the flag and throw in is taken to restart the game.

The main referee is assisted by two line referees, each controlling one half of the field and moving along the sideline with the game of play.

Sideline soccer referee will call offside, out of bounds, incorrect throw in etc...

Being on the sideline, linesman sometimes has a better view of foul play and offside, so he will signal the center referee when he feels like the game should be stopped.

Sideline Referees communicate with the main ref using different movements with their flags.

If the soccer referee flag is kept down, the play continues.

Professional Leagues have a Fourth Referee in soccer games. , who controls substitutions and keeps Coaches in their coaching area.

The fourth official controls substitutions, keeps Coaches in their coaching area and shows the extra time added at the end of each half.

Lately there have been 2 more referees introduced to the game.

Each referee is located behind each goal looking for any obstruction of soccer rules, and ensuring that the whole circumference of the ball has crossed the goal line for a goal to count.

Besides having a good eye, soccer referees have to be in good shape and able to run with the play.

The central referee will always want to be closest to the ball so he can better see what is going on.

Central referee will run as much as the players on the field, due to constant movement following the game action.