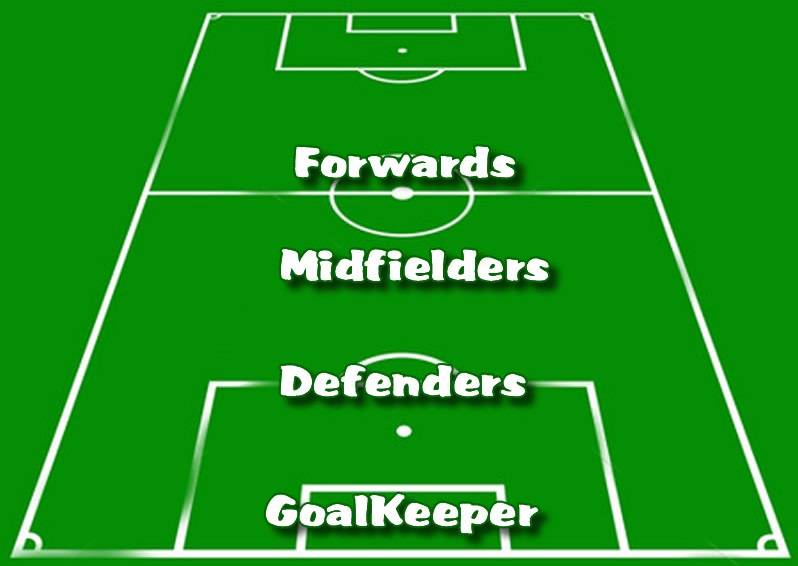 Soccer Positions on the Field Will Depend on Team Formation.

Soccer positions can be split up into 4 different categories:

Soccer positions on the field will depend on the formation that the team is using for the game.

Formation will also have an impact for Teams playing a more Attacking or Defending style of soccer.

Soccer match is started with 10 outfield players and 1 goalie on each team, according to FIFA Laws of the Game.

Outfield players will have specific areas on the field that they are expected to cover and dominate during the game.

This area of play is usually referred to as Soccer Player Positions.

Once every player on the field dominates their position on the field, beautiful soccer that seems like clockwork is played, with every player knowing where their teammate is without even looking.

Watching Professional teams like Barcelona, Real Madrid, Juventus, Manchester United, Chelsea etc... can paint a picture of complete soccer when every player knows their role on the field.

Goalkeeper has one job and one job only, don't let the ball go inside the goal.

Goalkeeper is allowed to use any part of his body to prevent the ball from going inside their goal.

Once the Goalkeeper leaves the penalty box, he is considered another outfield player.

Goalkeepers are usually agile and fearless.

Training for Goalkeepers is very demanding in order to develop cat like reflexes that are seen on the field.

This position in soccer is more and more fading away, with more teams utilizing every player on the field instead of having a free roaming Sweeper.

Sweeper soccer player position will usually be occupied by the most experienced, calm and intelligent player.

This player will be the last line of Defense after the Goalkeeper.

Sweeper soccer position will not have marking responsibilities, and will tend to be dropping back a few yards behind the defense.

These players tend to be very intelligent and will create offside for the opposite team by stepping up at the right moment to cause offside.

Sweeper is the leader of defense, and this position requires players to be loud and commanding on the defensive line.

Sweeper will cover any loose balls and make sure that his Defenders are positioned well, covering all the gaps on the field.

These players tend to read the game very good and play smart and simple soccer.

They are very good in Defending 1vs1 situations and air balls.

Center Back will mark the opposing teams Forwards and make them uncomfortable throughout the game.

Center Backs are usually strong, tall and great in the air, but in some cases lack speed because of their size.

Center Back positions are usually played by two players in the center of the defense.

Communication between the Center Backs is the key to performing well in the game.

These two players depend on each other, so if one CB makes a mistake, the other CB will not be far to run in and help correct it.

Center Backs have great anticipation of where the ball will go and are very good at reading the game and heading the soccer ball.

Left and Right Back positions in soccer are occupied by players who love to play next to the sideline.

These players will be decent defenders, whose defensive job will include blocking the opponents crosses, marking their wing players and closing down gaps on the field by listening to their Center Backs or Sweeper.

Side Back soccer player positions require a lot of stamina.

Player in this position will make runs offensively for support, than quickly have to get back into position to defend.

Side Back soccer players are usually quick, agile, possessing great stamina and the ability to cross the soccer ball into the box.

Wingback positions are usually used when the team plays with 3 Center Backs, allowing the side players to play more offensively, with less defending responsibilities.

Three Center Backs will allow more freedom to the Wingbacks to push up and help offense by providing crosses and support in the attack.

Wingback players tend to be quick, good dribblers and great ball control to create chances in the attack.

These players will find themselves in the opponents half frequently.

Wingbacks will come back into own half to close gaps in defense and track back their opponents on the wings.

As soon as the ball is won back, their job is to make the field wide and look to receive the ball, relieve pressure and start the attack.

Wingbacks are utilized best during a counter attack as they have the ability to bring the ball up with lightening fast speed.

"I am a member of a team, and I rely on the team, I defer to it and sacrifice for it, because team, not the individual, is the Ultimate Champion." - Mia Hamm

Left and Right Midfield positions in soccer are played by players who like to create and score goals.

These players will have attacking traits, always looking to support the Forwards with crosses and passes, but also score goals by taking on players and looking for a long distance shot or a lay off pass.

Players in this soccer field position will always try to look for opportunities to rush the penalty box when the ball is crossed from the opposite side.

They will play in the opponents half of the field, along the left or right sideline.

Although LM and RM are attacking positions, they will also play defense and mark opponents when defending.

When defending, Side Midfield players will mark the opponents side backs.

They will find themselves tracking back to defend many times during the game, so Stamina is a big factor in this position performance.

As soon as the ball is recovered, they will look to move forward into the opponents half and receive the ball to relieve pressure or go attack.

These players tend to have lightning fast speed and great dribbling skills.

This position in soccer is played right in front of the defensive line, disrupting the opponents attack any way possible.

Players in this soccer position require a lot of stamina and the ability to perform to the maximum every game.

They are usually strong, great tacklers and will show you the dirty side of the soccer game.

Defensive Center Midfield players are very strong in the air and will deal with plenty of air balls kicked out by the opponents keeper.

This player will mainly play around the center circle receiving the ball from the defenders and connecting passes forward.

Defensive Midfield players will look to stop the attack or play in the midfield; by tackling, fouling or provoking other players.

This position is usually occupied by players that have a strong character and high work rate.

Central Midfield players are there to connect passes with all the other players, offensively and defensively.

Players in this field position will have great passing ability and ball control.

These players will often find themselves in shooting opportunities from distance, which is one skill that makes a center midfield player more dangerous offensively.

They will need great stamina to run forward for support and creating chances, than getting back on defense when the ball is lost.

Their area of movement should be the center of the field, from opponents 16 yard box to their own 16 yard box.

Technical and passing ability is a must for this soccer position.

Players in this position will run into empty space and look to get the ball as frequently as possible.

They are the creative force on the field that will make goal scoring chances for themselves and their teammates.

Center Midfielders are there to relieve pressure from the defense by receiving the ball from the defenders in their third of the field.

These players are very comfortable on the ball and always look to receive and get themselves on the soccer ball.

Attacking Midfield position will require the player to have excellent skills with the ball, stay calm under pressure, be creative on the field, take chances and most importantly be ready to take punishment on the field.

This soccer position can decide a game with one special move or pass.

Attacking Midfield players are leaders on the field, giving 100% during every game and encouraging others to follow with the same effort.

Player in this soccer position will pull the strings on the attacking end of the field.

They will run into empty space, take on defenders, make through ball passes, look to split the defense and always look for a way help the attack score.

How defensive this player will play depend on the instructions from the players Coach.

In most cases, Attacking Midfield players are the classic number 10, going where he wants and doing what he wants during the game, like Messi for Barcelona. 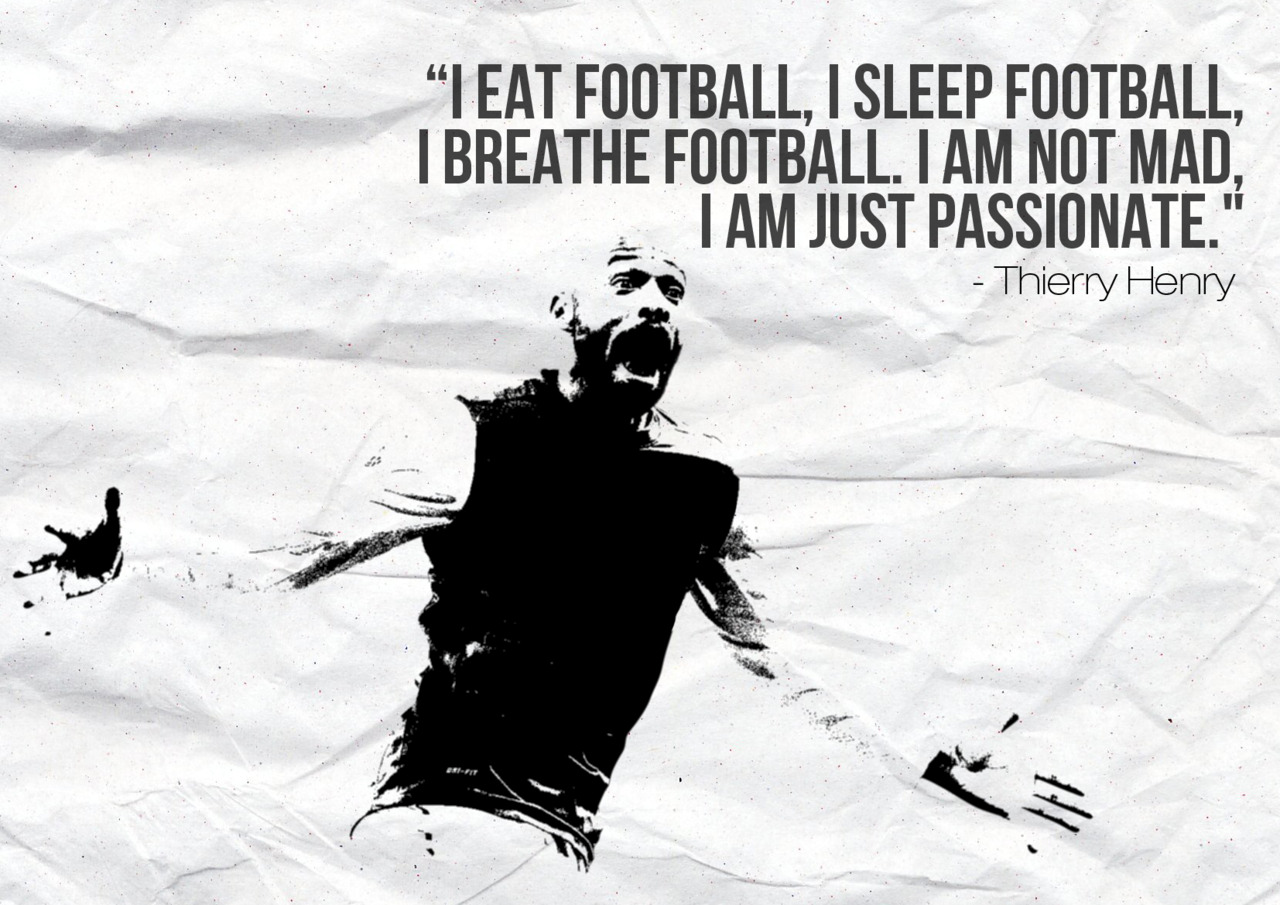 Wide Attacking soccer position will require the player to cross the ball, take on defenders, run inside the box for crosses from the opposite side, score goals and make goal scoring opportunities for others.

Wide Attacking players will mainly play in the opponents half of the field, towards the right or left sideline.

Their defensive responsibilities require them to run back and help the defense frequently.

Their position on the field makes them a great option for defenders to aim at with long balls.

These players love to get isolated and take on defenders in 1v1 situations.

They will create chances for themselves and their teammates using their creativity, dribbling and crossing skills.

Striker is there to score goals.

It can be very hard to play this position with constant struggle to fight for ball possession.

Striker is a point man in offense, usually big and strong player, who doesn't need much space to put the ball in the net.

These type of players will not run all over the field, but will rather play right next to the last defender, waiting and anticipating passes and mistakes by the defenders.

They are also used to bring the other players into attack by receiving the ball and keeping the possession while the rest of the team joins the attack.

These players will be a threat in the air and on the ground, as long as they are around or inside the penalty box.

Striker position should be filled with players that tend to love to shoot every time they are inside or around the penalty box.

These players tend to think about shooting every time they get the ball and are sometimes considered selfish.

Although they can seem selfish, their job is to score goals, and they should be the ones always looking for a way to put the ball in the back of the net.

Center Forwards are on the field to score goals and provide options in the attack.

These players, unlike Striker, will push wide to look for the ball and even occasionally drop back to receive the ball.

Their work rate is much higher than of a Striker, who mainly plays alongside the last defender.

This position requires great ball control and the ability to take on players in 1vs1 or even 1vs2 situations.

These players tend to have a great shot, tricky dribbling ability, decent crossing ability and high work rate in the attack.

Center Forward will create chances for himself and his teammates while also pressuring their defenders when the ball is lost.

Its usually a good idea to play with one Striker, more of a target man, and a Center Forward alongside him.

Center Forward will make runs and open up space for the Striker, who is always closest to the goal and has the ability to keep the ball and get other players involved around the opponents penalty box.