Soccer Fouls and the Physicality of the Game 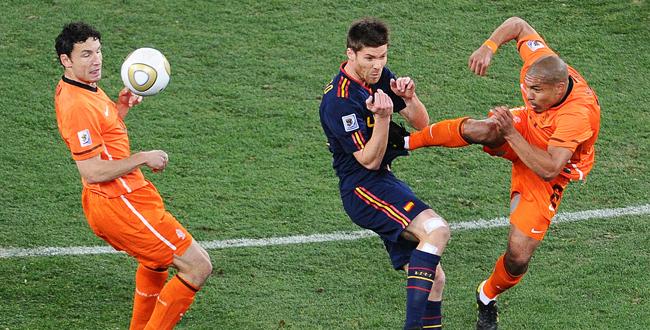 Soccer Fouls Lead to Stoppage of Game,
Unless There is Advantage Being Played.

Soccer fouls are very common in any soccer match.

Fouls can occur often, depending on how good the teams are, and how competitive the league is.

Rivalry between two teams will usually increase the physicality of the game, which will increase the fouls and penalties awarded in the game.

Rival games are usually very exciting to watch, because of the love/hate relationship of the players, and defending the home turf.

Soccer games can get very physical, causing the referee to show several yellow or red cards to control the game and protect the players.

After all, soccer is a contact sport where players get kicked and fouled from time to time, or in some games, often.

Depending how harsh and strong the foul is will depend on weather there will be a caution with a yellow, ejection with a red card, or no caution and just a simple restart of play.

Intentional fouls occur when the defender goes intentionally at the player and not the ball, or tugs on the attacking players shirt stopping the gameplay on purpose.

Referees will judge how bad the offense is, and will caution the player with red or yellow card if needed.

Intentional soccer fouls are usually cautioned with a yellow, or sometimes red card, depending on the severity of the tackle.

Soccer is a game played on adrenaline, fitness and finesse.

Soccer fouls will sometimes happen out of frustration, with players going into the tackle with the intention to injure the opposing player.

Intentional fouls with the intent to injure the other player, and every tackle from behind, will usually result in a straight red card and ejection from the game.

Straight red card will also be shown to the last defender, if he/she obstructs the attacker from a clear scoring opportunity (around or inside the penalty area).

Players who make frequent fouls throughout the game will be cautioned with a yellow card, usually after the referee warns the player of constant fouling and stoppage of the game.

Soccer is a very physical game; getting kicked and pushed around is mandatory, however soccer fouls are recognized by the referee and cautioned accordingly.

Pinching, provoking, and doing anything to get the opponent to lose his/her temper and concentration in the game is what happens during competitive soccer matches.

Soccer develops players mentally, teaching players that losing temper will result in the loss of control in the game, leading to harsh tackles, poor performance and yellow or red card.

Mentally strong players will keep their focus on the game, offensively and defensively, with one goal in mind, WINNING the game.

Players who are provoked to lose their temper during the game will react slower in every aspect of their game, offensively and defensively, and later look for excuses.

Staying calm and playing to win is the best attitude to have during any soccer game, regardless of any fouls that happen in the game.

Winning the match is the BEST WAY to get back at other players and their whole team...

Every player will get kicked, provoked, pinched or stepped on, with the referee NOT SEEING what happened.

Best thing for players to do in this situation is to simply get up, shut up and keep playing... try to score a goal.

Frustration and Retaliation will result in a caution or ejection from the match, followed with suspension from the game as the referee sees fit for the offense done.

Fouls in soccer can happen anywhere on the field regardless of where the ball is.

If a foul happens inside the penalty box, penalty kick will be awarded and a yellow card produced.

If the foul inside the penalty box is made by the very last player, disrupting a clear goal scoring opportunity, referee should be pulling out the red card.

Referee is the one that has the judgment of the severity of fouls and will caution players using his judgment on the field.

Fouls and Penalties are just a part of what makes soccer BEAUTIFUL.