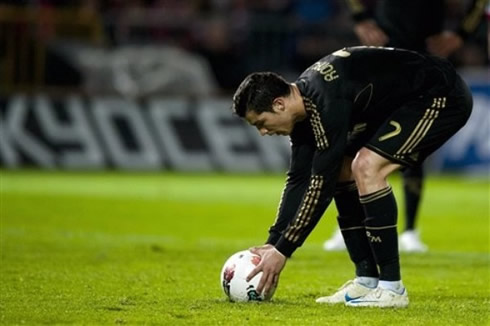 Penalty Kicks in Soccer Are Taken From 11 Meters Out
From the Center of the Goal.

Penalty Kicks in Soccer are the worst punishable offense for the opposite team.

Once the attacker with the ball gets inside the penalty box, defenders need to be extra careful not to make a foul or handle the ball with their arms.

Tripping, kicking or pushing the attacking player inside the penalty box will result in a soccer penalty shot.

Handling the ball with arms inside the 16 yard box will also result in a penalty shot awarded.

Goalie is the only player that can use his hands inside the penalty box.

Center referee will be the judge and the jury in calling the penalty shot or letting the game continue.

There is no rule about intentional or unintentional handball. Handball inside the penalty box results in a soccer penalty kick in many cases, unless the referee misses to see it.

In most cases player that committed the foul or handled the ball with his hands to cause a penalty kick will be shown a yellow card as well.

If a tackle inside the penalty box (16 yard box) is reckless, from behind, or if the defender uses hands to stop the ball from going inside the goal, red card can be expected, and the player will have to watch the rest of the game from the sidelines or the locker room.

Soccer penalty kicks are taken from the white penalty spot marked 11 meters away from the center of the goal.

Player has the chance to shoot on goal, in a one on one situation with the Goalkeeper.

Penalty kick is never good for the team that concedes it, because the odds are highly stacked in the kickers favor.

During a soccer penalty shot, Goalkeeper is ALLOWED to move left and right on the goal line, however he is NOT ALLOWED to step forward until contact with the ball is made.

The referee blows his whistle and the kick is ready to be taken.

All of the other players have to wait outside of the penalty box until contact with the ball is made. Once the player kicks the ball, game is continued.

Blocked shot by the Goalkeeper save, post or a crossbar puts the ball back into play and any player can pounce on the rebound ball to score a goal.

The assistant referee will come inside the field and stand next to the goal line during a penalty kick.

Assistant Referee will make sure that the whole circumference of the ball has crossed the goal line, and watch for any obstructions on the follow up play.

Once the kick is taken and no rules were broken, game is continued and the play goes on.

Soccer penalty shootout will take place if the game is tied after 120 minutes of play (2x45min halves and 2x15 min extra time).

This usually happens in playoff situations or tournaments.

Penalty shootouts are started with five players from each team.

The Referee is given the list of 5 players and the order in which they will shoot, by each teams Coach.

If the game is still tied after 5 shots, sudden death shootout is started with 1 player from each team shooting until the winner is decided.

Only the 11 players on the field, including the Goalkeeper, can shoot penalty kicks.

If the game is still tied when all 11 players have taken a shot, players will start over again, continuing with sudden death.

Soccer penalty shootout game is fun and can be played towards the end of every practice.

Players can play elimination style soccer shootout to add some pressure on them. Miss and be done, score and keep playing.

Penalty Kicks in Soccer are best taken with the inside of the foot, as it is the most accurate way of kicking the soccer ball.

Players should pick their side and focus on putting the ball where they have envisioned.

No matter how you decide to shoot penalty kicks, practice makes better.