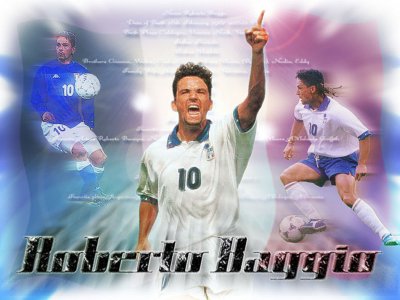 Mentioning the name Roberto Baggio to anyone around the world that follows soccer at all will point to the one and only Roberto Baggio and his famous ponytail as well as his missed penalty kick during the 1994 World Cup Final.

Another fact that I have found out while researching for this Roberto Baggio bio is that he is well known in the United States where soccer is slowly gaining popularity at this time.

This may be due to the 1994 World Cup that introduced soccer to many American people and Baggio's performance during this world cup where he in big part helped Italy reach the final against Brazil.

But what people remember even better is the final shot taken by Roberto Baggio from the penalty spot which ended up high in the stands and Baggio losing a chance for winning a World Cup.

Growing up in a small town not far from the city of Vicenza, Roberto Baggio soccer career starts in Vicenza, a club that played in the 3th Italian division at the time.

Baggio Roberto spent three years with Vicenza which were crucial for Baggio as he learned the professionalism and basics of soccer during this time.

While playing at Vicenza, Roberto Baggio caught the eye of scouts from Fiorentina and was immediately brought in on a 5 year contract.

Still a new face and unknown, Baggio did not get much playing time during the first two years but he kept his patience and waited for his chance which eventually came on September 1st, 1986.

He showed his flair and hunger to score goals which led to top form during the next 3 years.

Winning his first team spot and becoming an idol for Fiorentina fans, Baggio became one of the most feared strikers during this time.

It would not be long before Roberto Baggio bio was enriched by the call for the Italian National Team.

Every club in the world wanted to sign this pony tail goal scoring machine and even though Fiorentina did not want to part with Roberto Baggio, they would receive an offer they could not refuse.

After winning the Seria A, Juventus wanted to sign Baggio and they gave Fiorentina an offer they could not pass up as the sum of $15 million was offered by Juventus for Roberto Baggio, being a record transfer at the time.

Roberto Baggio Biography - From Purple to Black and White

Just like everyone had hoped, Roberto Baggio came to Juventus and played 5 best seasons of his career, scoring 78 times in 141 matches in what is regarded as the most defensive league in the world.

In a match against Fiorentina (his former club), Roberto Baggio refused to take a penalty kick and when he was substituted he picked up a Fiorentina scarf that was thrown from the stands and kissed it.

Later on he said "Deep in my heart I am and will always be purple." (color of Fiorentina).

In 1995, Baggio helped Juventus win the Scudetto. It was the first league title for Roberto Baggio and last year with Juventus.

After winning the league title with Juventus in 1995, AC Milan would come in and buy the already famous superstar.

That same year Baggio helped AC Milan win the league title "Scudetto" becoming the first player to win the league in consecutive years with different teams in Seria A.

After 2 years with AC Milan, Roberto Baggio transferred to Bologna for no clear reason.

Here he performed as well as ever before scoring career high 22 goals during the 1997-1998 season.

Continuing to play in great form, after 1998 World Cup Baggio wanted to move to a bigger club again and his choice became Inter Milan.

Roberto Baggio Biography - Inter Milan was not a good choice

Inter Coach Marcello Lippi did not favor Baggio, and soon after he would be benched which caused him to lose his regular spot in the National Team as well.

Later on in his autobiography, Baggio declared that Lippi had effectively dumped him after Baggio had refused to point out which of Inter's players had expressed negative opinions about the coach.

Baggio's career suffered and his name started to fade from the papers and TV.

After 2 years with Inter Milan, Baggio decided that it was time for a move into a smaller club where he would have a sure spot on the team and the opportunity to show the world that Roberto Baggio was still a very scarry threat in attack.

During his 4 years at Brescia, Roberto Baggio managed to score 45 goals in 95 matches. He was also out for most of the season during 2001-2002 because of a knee injury.

Despite his hard work and great performance, Baggio was not called up for the 2002 World Cup.

His number #10 was retired by Brescia.