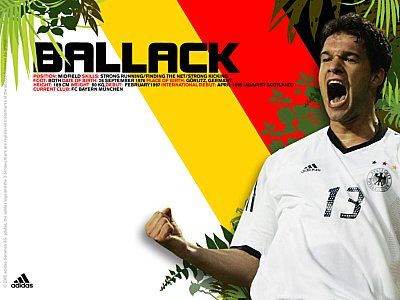 Michel Ballack bio as a soccer player starts when he was only 7 years old at the local club Chemnitzer FC.

He wanted to follow in his fathers footsteps but would reach the heights in his career that his father never reached playing in the second division of Germany.

His skill, size and the ability to play with both feet in the central midfield position earned him the nickname of "Little Kaiser" after the German legend Franz Beckenbauer, who was named "The Kaiser" meaning "The King".

Playing for Chemnitzer FC did not expose the talented midfielder due to the fact that he was playing in the Second Division.

However, newly promoted FC Kaiserslautern Coach Otto Rehhagel saw the potential in Micheal Ballack while playing in the second division and brought the young Ballack into the top German Bundesliga.

After two years with Chemnitzer FC, Michael Ballack bio continues with FC Kaiserslautern where he made his first appearance during the 1997-98 seasons seventh game.

The following season, he became a regular first team starter as well as one of the main players for FC Kaiserslautern.

He won one title and reached quarter finals in the Champions League during the 2 seasons with the club.

After 2 seasons with FC Kaiserslautern, Ballack transfered to Bayern Leverkusen on July 1st 1999 for the sum of €4.1 million.

He was 22 and he made his presence at Bayern Leverkusen with a bang as he found his top form playing a more attacking role and establishing his name as one of the top players in German soccer.

After playing at Leverkusen for 3 seasons, Ballack was the major player to bring this mid table team into a contender for the title.

Bayern Leverkusen had a run for all three trophies including Champions League, the German Cup and the League Title but would finish runners up in all three competitions earning the name of "Treble Horror".

2002 was not a great year in Michael Ballack bio as his National Team lost the final match to Brazil during the 2002 World Cup.

Following the 2002 World Cup and great display of skill and leadership playing a key role in Germany reaching the final, Ballack transferred to Bayern Munich for reported €12.9 million.

During his time in Bayern Munich he reached his top form scoring 47 goals during 135 matches in all competitions.

He played a key role in center midfield for Coach Magath and won 3 League Titles and 3 German Cup's.

The only downside to Ballack's career in Bayern Munchen is that he was criticized for choking and under performing during the Champions League matches.

After winning the title and the cup for the third time, Michael Ballack decided its time to move from Germany to English Premier League and Chelsea where he also said that he wanted to end his career.

His first match for Chelsea was in August 2006 against Blackburn Rovers.

The next four years had its ups and downs for Ballack including an ankle injury which kept him on the sidelines for 8 months.

When his contract ran out in 2010, Chelsea would not renew it and it was time for Ballack to come back to German Bundesliga and Bayern Leverkusen.

Michael Ballack Biography - Back to Leverkusen

After 3 months of arrival to Leverkusen in June, 2010 it was announced that Michael Ballack will retire from both club and international soccer/football due to shin injury.

However Ballack would make a comeback in February, 2011 coming in off the bench for Simon Rofles.

He still plays for Bayern Leverkusen and its just a matter of time when he will announce another retirement just to come back and end up playing in USA or Emirates this time ;)