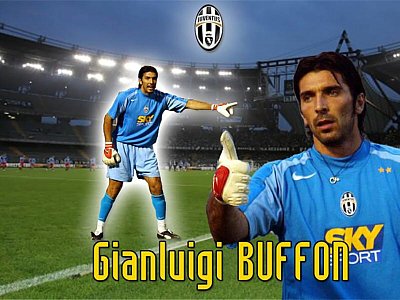 Gianluigi Buffon profile can start by stating the fact that Gianluigi Buffon is perhaps one of the most complete soccer/football goalkeepers to ever play this great game of soccer.

He possesses cat like reflexes, authority inside the penalty area, tall and athletic figure as well as great sportsmanship on the field.

Its no wonder that his first professional contract came when he was only 17 years old.

Gianluigi Buffon bio as a soccer player can start when he was 13 with the youth team of Parma where he spent 4 years honing his goalkeeping skills during the 1991.

Gianluigi Buffon biography as a professional soccer player starts after only 4 years in the youth system of Parma where his skills started to attract the interest of the first team staff leading him to sign his very first professional contract when he was only 17 years old, during the 1995 season.

His debut came against AC Milan in a goalless draw on November 19th, 1995.

It took him only one season to establish himself as a starting goalkeeper for Parma.

He would go on to make well over 200 appearances with the club in all competitions winning his first trophy during his fourth season with the club as Buffon helped Parma win the UEFA CUP.

This only fueled Gianluigi Buffon rise to the top as he was already considered a huge prospect for the goalkeeper position, not much time would pass until one of the giants from Seria A came in with an irresistible offer which Buffon or Parma could not pass up.

Transfer to Juventus for a record £32.6 million

During the 2001 summer, Buffon bio made a turn as he made a move to Juventus for £32.6 million. This was a record transfer fee for any goalkeeper at the time.

His second season with Juventus was just as successful as he helped the "Old Lady" reach the final of UEFA CHAMPIONS LEAGUE but would lose in a penalty shootout against the Seria A rival AC Milan, however Juventus would go on to win the League Title once again.

Buffon won hearts, respect and trophies in Torin and all around the world.

Gianluigi Buffon biography shows him being named as one of 125 greatest living soccer players in the world by the great PELE.

During the 2005 season Gianluigi Buffon bio was tainted as he suffered a dislocated shoulder after colliding with the AC Milan midfielder Kaka during the Luigi Berlusconi Trophy match.

After surgery and therapy he made a come back in November but unfortunately another injury would strike him and he would have to watch from the sidelines until January of 2006.

After recovering from the injury, Gigi Buffon helped Juventus take their second consecutive Seria A title and 4th title all together since joining the club in 2001.

It is important to mention in this Gianluigi Buffon bio that Buffon also showed his true character after sticking with Juventus through the hard time when Juventus was involved in Calciopoli scandal causing them to lose 2 Scudettos and get demoted to Seria B.

Many top players left the club, but Buffon stuck with Juve and helped them get back into the top Italian Seria A league the following season.

Unfortunately Buffon was again sidelined and haunted by several injuries during his 2009-2011 seasons where the team performance suffered and rumors arose that Buffon was not happy and wanted to leave Juventus.

All the rumors were false as he again showed his loyalty to the club by signing his contract extension until 2013.

As age is catching up with this world class keeper we can expect him to retire very soon due to more frequent injuries but his name will forever stay in the history of soccer as one of the greatest goalkeepers to ever play this game.