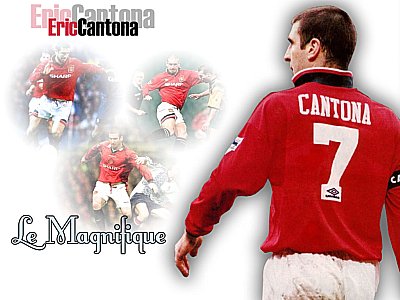 During his early days he started playing for the local club SO Caillolais in the goalkeeper position, however his creative and goal hungry tendencies showed on the field and he started to play forward position more and more according to Eric Cantona profile.

Cantona biography is full of his incidents on and off the soccer/football field as he was suspended on many different occasions for many different reasons throughout his career.

At one point in his career he was considered a "Madman of Soccer".

After spending two years with the French youth team Auxerre, Eric Cantona Bio as a proffesional soccer player starts with debut for Auxerre on November 5th, 1983.

Before coming back to Auxerre, Cantona was loaned to a second division team Martigues where he scored 4 goals in 15 appearances after which he returned to Auxerre in 1986.

Eric Cantona Biography shows that his performance for Auxerre was really impressive scoring 23 goals in 82 matches which earned him International call for France but his troubles with discipline would start soon after.

During the 1987 he was fined for punching his own teammate and the next year another incident followed as Cantona was suspended with a 3 match ban because of a dangerous tackle on a Nantes player. His 3 match ban was later overturned into a 2 match suspension.

After winning the 1988 U21 European Championship, Eric Cantona bio continues with a record transfer fee of £22 million to Marseille.

Not even a year with the club and Eric Cantona profile as a madman on the soccer field started to show again as he kicked the ball at the crowd and than ripped his jersey and threw it on the ground after being substituted in a friendly match against Torpedo Moscow.

This incident caused him to be suspended without pay for a full month.

His international career was also on hold as he was suspended for a full year because of insults against French national coach on live tv.

Eric Cantona profile shows him having a hard time settling in Marseille, who loaned him out to Bordeaux for six months where he scored 6 goals in 11 matches before making another loan move to Montpellier, this time only for a year.

He continued his good scoring form with Montpellier by scoring 10 goals in 33 matches with the team.

During his one year at Montpellier, Eric Cantona bio had another incident added to it as he got in a fist fight with teammate Jean-Claude Lemoult where he even threw his soccer cleats at Jean-Claude's face.

This caused other teammates to make requests for Cantona to be sacked, however few of the teammates and friends of Eric Cantona managed to keep him on the team and he faced only a 10 day ban from the training grounds.

Montpellier went on to win the French Cup and Cantona was one of the key players on the road to winning this cup.

Eric Cantona Biography - Back with Marseille side for a year

After helping Montpellier win the French Cup and showing great form, Marseille brought him back into the squad.

Eric Cantona profile shows him performing well and staying out of "Madman" headlines at least for the time spent playing under Coach Gerard Gili and his successor Franz Beckenbauer.

Because of poor results Beckenbauer was sacked and Raymond Goethals came in to replace him.

This resulted in many disputes and arguments between Cantona and Goethals which led to Cantona's transfer to Nimes the following season.

After coming to Nimes in 1991, Eric would once again make the headlines as he threw the ball at the referee after disagreeing with one of his decisions.

He went in front of the disciplinary committee of French Football Federation where he was banned for one month.

His response to this ban was walking up to every member of the committee and calling them idiots which resulted in a 2 month suspension instead of one.

He announced his retirement from professional soccer soon after this ban was issued.

Michel Platini was the biggest reason for Cantona's comeback to professional soccer and English Premier League.

Liverpool was the first choice but they didn't want to mess with the harmony and peace in the dressing room so they passed on the goal scoring madman.

He was offered a one week trial with Sheffield Wednesday and after the trial was done and no contract was offered Cantona signed a deal with their rivals Leeds United for a reported £900,000.

This proved to be a great move for Leeds as they won their "Football League First Division" championship which was renamed to English Premier League the following season.

Eric Cantona profile continue with the move to Red Devils On November 26th, 1992 for a reported £1.2 million.

This was a tough time for Manchester United and bringing of Cantona proved to be a great move for the Red Devils as he helped them win the Premier League Title for the first time since 1967.

It is important to mention in this Eric Cantona bio that he was the first player ever to win two titles back to back with a different club team.

His first year could not go without incident as he spat on a fan during the game against former club Leeds United and he was fined £1,000 by the FA.

Continuing his great form, Cantona helped Manchester retain the title and win the FA CUP during his 2nd year with the club.

During his third season with Manchester, Eric Cantona bio is enriched by one of the most famous accidents that attracted headlines around the world and especially in England.

After having his shirt pulled by Richard Shaw in a match against Crystal Palace, Cantona responded by kicking the player.

Red card was shown and as Cantona walked towards the dressing room he lunched a "kung fu" type of kick at the Crystal Palace fan Matthew Simmons, he than followed up with few punches before being dragged away from the angry crowd.

He was arrested and convicted for assault, resulting in 2 weeks prison time which was than dropped to 120 hours of community service.

His national team captaincy was taken away and Manchester United punished him with two weeks wages.

Manchester was down 10 points behind the Newcastle United during the first half of the season while Cantona was suspended but once the madman came back he helped them close down the gap and eventually take over the first spot becoming Champions at the end of the season.

Eric Cantona biography shows that it was a memorable moment for Cantona as he was named the team captain in the FA CUP FINAL against Liverpool where he scored the only goal to lift the FA CUP as a team captain.

The following season 1996-97, Cantona retired after scoring 80 goals for Manchester United in all competitions during his 5 years with the club.

Madman or not, you decide :)

One of the greatest soccer players with many incidents in the long Eric Cantona Profile :)