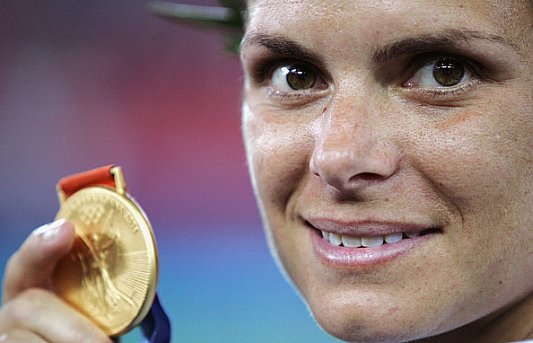 Mia Hamm is a retired American soccer player that played many times as a Forward for the United States Woman's National Soccer Team.

Mia holds the record for scoring the most goals on International level for United States than any other player, male or female in the history of United States.

She holds this record with 158 goals.

Mia was named Woman's FIFA World Player of the Year on two occasions in 2001 and 2002 when that award first came out according to Mia Hamm Biography.

Mia retired from soccer in 2004 after playing her last game in 2004 Fan Celebration Tour to commemorate the USA Woman's National Team victory in the 2004 Summer Olympics.

Soccer player Mia Hamm Bio shows that in 2007 she was inducted into the National Soccer Hall of Fame.

I think it is important to mention that the professional woman's soccer league started in 2009 features Mia Hamm's silhouette on its logo.

Mia Hamm was born with partial clubfoot and she had to wear corrective shoes as a toddler.

Even as a young woman, Mia was extremely athletic and would often compete with the other boys on the block in childhood games often beating them.

Born into the Air Force family with five siblings to parents Bill and Stephanie Hamm, young Mia Hamm moved a lot and resided in many different places such are Texas, San Antonio, Italy...

Italy is where the spark for soccer was ignited as Mia witnessed real Italian Passion for the sport when she lived in Italy.

Immediately after moving back to Texas young Mia Hamm soccer biography can start when she was only 6 years old joining the local woman's soccer youth club.

After displaying incredible talent in the local leagues and dominating all the other players in her age group it was just a matter of time before she would be called up for USA Woman's National Team.

At only 15 years old Mia Hamm biography shows her becoming the youngest player in Woman's Soccer History to ever be called up to play for National Squad.

Although young Mia did not play much her first couple years, mostly due to higher fitness and physical level of professional soccer, she did take that time to adapt to the high tempo of the game.

Slowly making her way into the first squad of United States Woman's Soccer team she managed to score her first goal for USA when she was only 17 years old in a match against Canada.

After finishing high school, Mia was already a successful soccer player being constantly called up for the National Team where she started to play regularly.

Instead of focusing on soccer only, Mia decided to get educated choosing the University of North Carolina.

This is where she had started to play for the University's woman soccer team called Tar Heels.

She was an All-American and Atlantic Coast Conference player of the year during her last three years with the University.

University of North Carolina lost only 1 match in 95 matches Mia Hamm played in.

She sat out the 1991 season to concentrate on the 1991 FIFA Woman's World Cup in China.

Mia ended her career with University of North Carolina creating all time records for her conference in goals, assists and total points.

In 1991 Mia Hamm became the youngest American woman to win a World Cup Championship at age 19.

Although young Mia's contribution was not as decisive during this World Cup, she did stand out in some matches during the competition considering that she was fairly fresh and inexperienced at International Woman's soccer circuit.

I think it is important to mention in this Mia Hamm biography that upon arrival to her University of North Carolina she was greeted as a hero and earned a nickname "Jordan" as a reference to Michael Jordan who went to the same University.

Mia Hamm was only 20 years old , earning her first World Cup Title with a promising career in front of her.

After finishing her University Mia focused solely on the USA National team participating in 1995 World Cup where United States came in 3th.

One memorable moment of 1995 World Cup is when Mia Hamm took the position of a goalkeeper with no one left to play in this position.

Despite losing the game and ending up 3th, Mia Hamm was voted the Most Valuable Player of the World Cup.

Mia's next competition was the 1996 Olympic Games where she contributed to the winning goal in the final against China by striking the frame of the goal and having teammate Shannon MacMillan put the rebound in the back of the net.

On May 22th, 1999 Mia broke the all time international record with her 108th goal against Brazil in Orlando, Florida.

Mia Hamm biography shows her and her United States teammates going all the way to the final where they faced the tough opponent China in front of more than 90,000 fans at Rose Bowl in a most dramatic match for United States Woman's Team in the history of this great competition.

After goalless draw the winner was to be decided on penalties.

On May 14th, 2004 Mia Hamm announced her retirement from professional soccer after the 2004 Summer Olympics in Athens, Greece.

In March 2004 Mia Hamm was selected alongside tammate Michelle Akers for the "125 Greatest Living Soccer Players" by Pele and commissioned by FIFA.

Mia's 151st goal and 259th appearance for United States came in a friendly match against Australia on July 21st, 2004.

She helped lead Team USA to another gold medal at the 2004 Summer Olympics in Athens.

Mia Hamm biography in soccer comes to an end after winning the Olympic gold medal.

Mia and her teammates went on a farewell tour of the United States that finished on December 8th, 2004 in a 5-0 win over Mexico at the Home Depot Center in Carson, California.

Mia had two assists in this game and was also part of three longtime national team members who announced their retirement from professional soccer after the 2004 Summer Olympics.