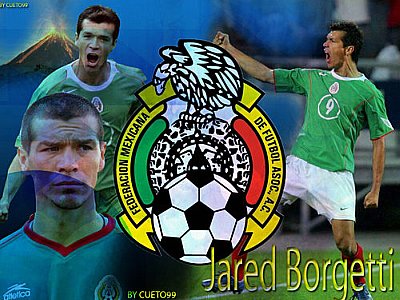 Jared Borgetti is a Mexican born striker that still holds the record for the most goals scored for his National Team Mexico.

Jared Borgetti bio has shown the world on many occasions how deadly he can be when he finds a little space around the goal area. Being 6 ft tall Borgetti has been renowned for his heading accuracy and power.

Jared Borgetti profile shows this Mexican born striker making his debut on March 6th, 1994 for Atlas in a loss against Club America.

During the next 2 seasons with the club he scored 21 goals, however he needed a bigger club to really reach his full potential.

Once the opportunity came, he jumped at it and signed with Santos Laguna where he first made a name for himself.

Jared Borgetti Profile - Santos Laguna over the next 8 years

After spending two seasons with Atlas, Borgetti's hunger for goals would attract a much bigger club, Santos Laguna.

This is where the prolific striker truly found his goal scoring form.

During his time with Santos Laguna Borgetti scored 189 goals in 295 matches.

Important to mention in this Jared Borgetti bio is the fact that Borgetti earned the golden boot for being the best goalscorer three different seasons during his time with Santos Laguna.

This was also the longest time that Borgetti spent with one club.

He was 31 years old when he left to play for Dorados.

His move to this club was mainly due to wanting to play for a home team close to where he grew up.

After one year with Dorados where he found the net 8 times in 14 matches, Jared Borgetti continued with another transfer to Pachuca where he spent one year as well.

This time he scored 8 goals in 15 matches wearing the Pachuca jersey in 2005.

Jared Borgetti bio also shows him being the very first Mexican player to play in the English Premier League.

He scored 7 goals in all competitions for Bolton Wonderers during his another short spell with the club that lasted another year.

After the 2006 season, Bolton released Borgetti who was getting older and had a hard time finding a team to play for due to his age.

The next four years would mark Jared Borgetti retirement from soccer as he moved from one club to another changing 7 clubs in 4 years.

With the release from Bolton Wonderers, Borgetti went on to play for 7 different teams in his last four years as a professional soccer player.

This marked the end of this great Mexican soccer player career as he made his last soccer playing days on a professional level at the club Leon.

After being released from Leon, Borgetti announced his retirement from professional soccer at the age of 37.