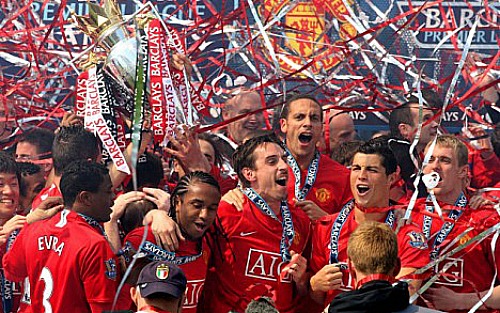 In fact Man United FC was formed in 1878 by railway workers in Newton Heath who also named the team "Newton Heath LYR" (Lancashire and Yorkshire Railway).

Newton Heath LYR joined the English Football League in 1892 only to increase their financial problems and by the end of the 19th century Newton Heath LYR faced bankruptcy.

The following season 1905/06 Man United FC reached the quarter finals of the FA Cup but more importantly finished second in the Second Division granting them promotion into the First English Football League, 12 years after they were relegated as Newton Heath LYR.

As league Champions, Manchester United played in the first ever Charity Shield where they won the trophy by beating QPR 4-0 in 1908.

1909 proved to be another successful year as Manchester United won their first FA Cup, after beating Bristol City 1-0 in the final.

1910 is an important year to mention in this Man United FC history as it was the year that Old Trafford became home for Manchester United moving from their old Newton Heath LYR home field Bank Street.

Their first season at Old Trafford in 1910/11 also brought Manchester United another League Title, however the following season 1911/12 Man United finished the league in a disappointing 13th place.

His successor became JJ Bentley, who took over the team helping them finish 4th after 1912/13 season.

Manchester United's form kept declining and they nearly escaped relegation by one point in 1914/15.

First World War broke out forcing soccer to be put on hold and the Football League suspended until 1919.

Manchester United came back to English Football League in 1919 following the end of the First World War.

The team had all new faces on the squad compared to the Manchester United squad prior to First World War.

Man United FC kept declining in form causing them to be relegated to Second Division in 1922 where they remained until promotion in 1925.

In 1927 John Henry Davies, who had saved the club from extinction and brought them to Old Trafford, died and was replaced by G H Lawton as club president.

Spending 5 years in First Division Manchester United did not achieve much and were relegated again in 1931 spending the next 4 years in the Second Division before earning a promotion in 1935/36 season.

Last year of soccer before the Second World War saw Manchester United finish 14th in the First Division at the end of 1938/39 season.
Soccer was once again put on hold by World War :(

Soccer was resumed in 1945 after the Second World War and Matt Busby was appointed as manager.

Matt Busby demanded unprecedented level of control over team selection, player transfers and training sessions which in turn led to Manchester United finishing 2nd in 1947, 1948 and 1949 including one FA Cup trophy in 1948.

Manchester's form continued to improve leading to their first league title in 1952, 41 years after the last time they were crowned champions.

Manchester United became known as one of the top teams in English First Division soccer winning two more consecutive titles in 1956 and 1957 with a squad of players whose average age was 22.

In 1957 Manchester United was the first team to compete in the European Cup.

They were eliminated by Real Madrid in the semi final, however they also made a record win that still stands today en route to the semi final when they destroyed Dutch side Anderlecht 10-0.

The following season 1958 would prove to be the most tragic moment in Manchester United history.

On the way home from their European Cup quarter final victory against Red Star Belgrade, the aircraft carrying the Manchester United players, officials and journalists crashed while attempting to take off after refueling in Munich, Germany.

Matt Busby took time to recover from the injuries suffered in this crash and the reserve team manager Jimmy Murphy took over the responsibility of managing Manchester United.

This same year Manchester United reached the FA Cup Final but would lose to Bolton Wonderers.

Manchester United history shows Matt Busby coming back and rebuilding the team during the 1960s bringing players such are Denis Law and Pat Crerand who combined with the next generation of youth players including George Best to win the FA Cup trophy in 1963.

In 1968 Manchester United became the first English club to win the European Cup after beating Benfica 4-1 in the final.

By 1968 Manchester United had three European Footballers of the year playing for them including Bobby Charlton, George Best and Denis Law.

Matt Busby resigned in 1969 and his successor was the reserve team coach and also former Manchester United player Wilf McGuinness.

Following an 8th place finish after the 1969/70 season and a very poor start of 1970/71 season, Matt Busby was persuaded to take back managerial responsibilities while Wilf McGuinness went back to his position as the reserve team coach.

In June, 1971 Frank O'Farrell was appointed manager but lasted only 6 months before being replaced by Tommy Docherty in December 1972.

Important to mention is that by this time Manchester United's best players Law, Charlton and Best had already left the club.

Man United FC reached promotion the following season in 1975 and went on to the FA Cup final in 1976 where they were beaten by Southampton.

The following year 1977, Manchester United reached the FA Cup final once again but this time came out victorious against Liverpool, beating them 2-1 and earning another FA Cup trophy in the process.

Tommy Docherty was dismissed shortly after following revelation of his affair with the club physiotherapist's wife.

Upon Docherty's dismissal, Dave Sexton was signed as the new Manchester United manager in the summer of 1977.

Under Dave Sexton, Manchester United football club failed to achieve any significant results finishing 2nd in 1979/80 season and loosing to Arsenal in the FA Cup final in 1979.

Without any results, Sexton was sacked in 1981 even though the team had won the last seven consecutive games before his dismissal.

Sexton was replaced by Ron Atkinson in 1981 who right away broke the British transfer fee record by signing Bryan Robson from West Bromwich Albion.

Manchester United was the favorite to win the league title during the 1985/86 season when they started their season with 13 wins and 2 draws in their first 15 matches, however they would end the season in 4th place.

Following season 1986/87 Man United FC under the management of Atkinson faced danger of relegation by November and because of team standings Ron Atkinson was dismissed.

After dismissal of Ron Atkinson, Alex Ferguson and his assistant Archie Knox arrived immediately and saved the team from danger of relegation leading them to 11th place finish at the end of 1986/87 season.

Despite a 2nd place finish the next year 1987/88, Manchester United finished again in the 11th place the following season 1988/89.

Sir Alex Ferguson had almost been dismissed as well if it wasn't for the victory over Crystal Palace in the 1990 FA Cup final saving Ferguson from being just another brief name in Manchester United History.

The following year Manchester United managed to bring home the trophy for 1991 Cup Winners Cup and 1991 UEFA Super Cup where they beat Red Star Belgrade 1-0 in the final that took place at Old Trafford.

The future of the club looked good and next year followed with more success as Man United FC claimed the League Cup title after beating Nottingham Forrest 1-0 at Wembley in 1992.

At the end of 1993/94 season, Manchester United claimed its first league title since 1967.

One year later , 1994/95 season, Manchester United won their second consecutive League Title for the second time since doing so in 1957.

Man United FC had also won the 1994/95 FA Cup, to complete the first "Double" in the club's history.

League title followed the following years and Manchester United had became one of the best teams as well as top supported clubs in the world.

In the 1998–99 season, Manchester United football club became the first team to win the Premier League, FA Cup and UEFA Champions League – completing "The Treble" in the same season.

Teddy Sheringham and Ole Gunnar Solskjær scored late stoppage time goals to claim a dramatic victory over Bayern Munich, in what is considered one of the greatest comebacks of all time.

Manchester United also won the 1999 Intercontinental Cup after beating Palmeiras 1-0 in Tokyo and than managed to stay Premier League Champions for the 1999/00 season and 2000/01 season.

Man United won another FA Cup trophy during the 2003/04 season by beating Millwall 3-0 in the final at the Millennium Stadium in Cardiff.

During the 2005–06 season, Manchester United failed to qualify for the knockout phase of the UEFA Champions League for the first time in over a decade.

The club recovered to secure a second-place league finish and victory over Wigan Athletic in the 2006 Football League Cup Final.

Manchester United football club regained the Premier League title in 2006–07 and 2007–08 seasons, and completed the European double by beating Chelsea 6–5 on penalties in the 2008 UEFA Champions League Final in Moscow's Luzhniki Stadium.

In December 2008, the club won the FIFA Club World Cup and followed this win with the 2008–09 Football League Cup as well as their third consecutive English Premier League title.

That summer, Cristiano Ronaldo was sold to Real Madrid for a world record £80 million.

In 2010, Manchester United defeated Aston Villa 2–1 at Wembley to retain the League Cup, its first successful defense of a knockout cup competition.

Manchester United is one of the most popular football clubs in the world, with one of the highest average home attendance in Europe.

The club's worldwide fan base includes more than 200 officially recognized branches of the Manchester United Supporters Club (MUSC), in at least 24 countries.

Manchester United football club has rivalries with Arsenal, Leeds United, Liverpool, and Manchester City, against whom they contest the Manchester derby.

There you have a little history lesson about one of the greatest clubs in the world, Manchester United football club.

Please check out the other links below.