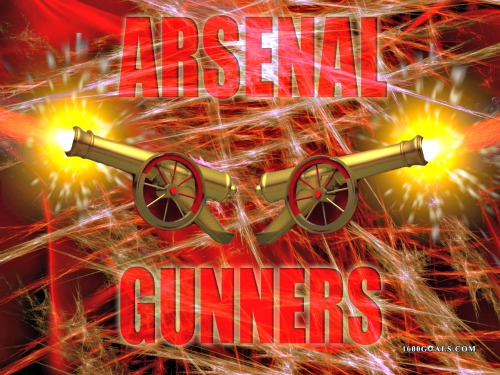 Arsenal football club was originally founded as "Dial Square" in 1886 by workers at the Royal Arsenal in Woolwich, South-East London according to Arsenal FC history.

The history of Arsenal shows that soon after the "Dial Square" was founded they changed their name again to “Royal Arsenal”, and shortly after changed it again to "Woolwich Arsenal" in 1891.

Woolwich Arsenal started playing in the Second Division of the English Football League in 1893, winning promotion into the top First Division in 1904.

Arsenal history points out that Woolwich Arsenal had a lot of financial troubles, mainly because of their geographic location in Woolwich making their attendances lower than any other club.

Henry Norris took over after bankruptcy with the intention of moving the club elsewhere.

Relegated back to the Second Division soon after Henry Norris took over, Arsenal moved to their new home in Highbury, North London where a year later they dropped “Woolwich” from their name, and came to be known as simply Arsenal.

As the English League administrators sought to reshape the league, Arsenal football club was invited to join the First Division once again at the expense of local rivals Tottenham Hotspur.

Arsenal has stayed in the top English Soccer league ever since as Arsenal history shows.

Herbert Chapman revolutionized the training methods for the club, as well as club tactics and gave them their first period of major success.

He signed their first real star players in Alex James and former top-scorer Cliff Bastin, giving the Arsenal soccer club the right players and tactics to dominate English football in the 1930s.

Chapman died suddenly and tragically of pneumonia in 1934.

Joe Shaw and George Allison from within the club were appointed to take the reigns of Arsenal ensuring the continued success of the club.

World War II was the reason for the professional soccer in England to be suspended bringing Arsenal's success to be put on hold.

During the post-war period, Arsenal appointed Tom Whittaker to take over the club.

Arsenal history shows that the club experienced a sudden decline after winning the FA Cup in 1949-50, going most of the 1950s and 1960s without winning anything, and unable to attract any top players to the club.

Former England captain Billy Wright was brought in as manager to try and revive the club’s fortunes, but his reign from 1962-66 was disappointing and trophy-less as well.

In 1966, Arsenal football club made an interesting choice of appointing their physio Bertie Mee as manager according to history of Arsenal FC.

More success followed with the historic achievement of winning the League Title and the FA Cup for the first time in clubs history during the 1970-71.

This history-making team was broken up in the following years, causing Arsenal to slowly decline for the rest of the decade not winning any titles apart from a classic, last-minute 3-2 FA Cup final victory over Manchester United in 1979.

In 1986, Arsenal's golden era started with the the return of double-winning midfielder George Graham as clubs manager.

The strict disciplinarian and tactician George Graham started bringing titles home in his first year as Arsenal FC manager, winning the League Cup in 1986-87, followed with a historic league title win in 1988-89, where they beat their title rivals Liverpool 2-0 at Anfield in the last game of the season.

Graham won another title in 1990-91, with the team losing just a single game during the season.

George Graham led the team to an FA and League Cup double in 1992-93, where they overcame Sheffield Wednesday in both finals.

Graham than helped Arsenal soccer team win their second European trophy, after beating star-studded favorites Parma in the final of the 1993-94 Cup Winners.

Graham was unfortunately sacked in 1995, after having been found guilty of taking payments from agent Rune Hauge in exchange for signing certain players.

His replacement Bruce Rioch lasted only one season, leaving after a dispute with the board of directors, who already had their eye on a new man to take over Arsenal as the Arsenal soccer history continue.

Rioch did not have much success with the club, but he signed England international David Platt from Sampdoria, and Dutch maestro Dennis Berkgamp from Inter Milan.

Dennis Bergkamp would go on to become a club legend, and was instrumental in the following successes of Arsenal FC.

After Rioch got the boot, Arsenal gave the club raigns to a little known Frenchman Arsene Wenger.

Arsene Wenger was largely unknown to the British press, but he revolutionized English football with his tactics, training, and attractive passing style of soccer that was nonexistent in the English game at the time.

Arsenal history shows that Arsene Wenger won the Double title in 1997-98 in his first full year with the club.

He repeated this Double Title in 2001-02, and in 2003-04 he achieved the improbable feat of winning the league title unbeaten.

Apart from the 3 Premier League titles, Wenger has won 4 FA Cups, reached a UEFA Cup and Carling Cup Final, and took Arsenal to their first Champions League final according to the history of Arsenal FC.

Arsenal have finished in the top 2 in 8 of Wenger’s 10 seasons at the club, although they have never managed to retain the title after any of the 3 seasons in which they won it.

Arsene Wenger is responsible for the creation of Arsenal’s academy infrastructure, a state-of-the-art new training ground, and it was under his counsel that they changed location as well, moving from Highbury to the nearby stadium they had constructed at Ashburton Grove, the Emirates Stadium.

The new stadium had a much larger pitch, and at 60,000 seats accommodated a lot more fans than the 38,000+ seater Highbury.

Although the club went into severe debt, they were very well managed, and they have managed a decent level of success on the pitch, allied with low spending, and much increased revenue from tickets.

The stadium is now generally always sold out, and after a period of transition for the young team that Wenger built, the club is well on its way to more titles.

This rivalry began when Arsenal moved out of South London to the Highbury stadium near White Hart Lane (Tottenham Stadium).

The rivalry between Arsenal and Tottenham intensified when Arsenal was invited to the English First Division at the expense of Tottenham in 1919.

In 2005-06, Tottenham lost a Champions League spot to Arsenal on the last day of the season.

The fan-bases are also traditionally quite different – Arsenal are known for their multi-ethnic, immigrant fan-base, whereas Tottenham have a history of predominantly white, wealthy fans.

Tottenham has not won the League since 1961.

Also local rivals, the rivalry with Chelsea FC is more based on directly competing for titles and players.

From 1997 to 2004, English Premier League was won by either Arsenal or Manchester United.

This developed a fierce rivalry from their competing for the league title.

Arsene Wenger and Alex Ferguson have engaged in heavy mind-games and verbal battles.

Also worth mentioning are the physical battles and tempers from talismans Patrick Vieira (Arsenal) and Roy Keane (Manchester United) creating a roaring intensity.

The clubs have had two on-field brawls. First brawl was in October of 1990, and the second in September of 2003.

In both those years, Arsenal went on to win the title.

Arsenal supporters are a dedicated lot, and have many nicknames for themselves and their team, including the Gunners, Arses, and Gooners.

Decision to relocate was made in 1999, and the stadium was completed in 2006.

Arsenal started playing at the Emirates Stadium in 2006-07 season with the first game ending in a 1-1 draw against Aston Villa.

Arsenal have a massive fan-base, and their previous site at Highbury stadium seated only 38,419 fans.

Due to the history of the building, and the cramped surroundings, Arsenal had no option but to build a new stadium elsewhere to accommodate more fans and increase revenues.

Due to the massive efforts made by the board, Arsenal managed to stay in the borough, and move to a site just 10 minutes from the old stadium.

Arsenal spent almost 400 million pounds on the stadium, of which 260 million was borrowed. 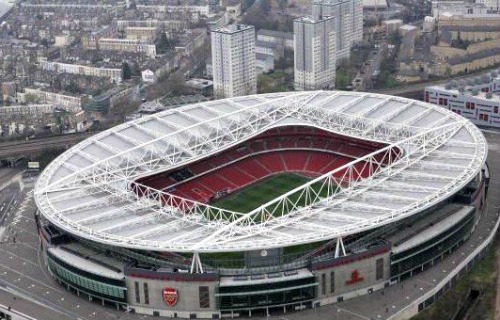