3-5-2 soccer formation is a formation in soccer with more attacking style of play with the strength of the formation coming from the midfield.

This soccer formation midfield is positioned in kind of a W letter with two outside players, two center midfield defenders and one attacking minded midfield. 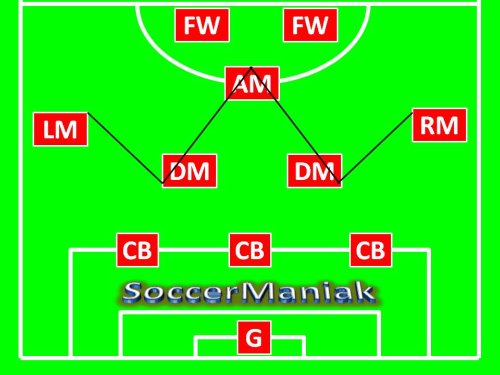 The 3-5-2 formation in soccer needs skilled and calm midfield to pass the ball and create attack through possession.

Two outside players (RM & LM) in 3-5-2 soccer formation are used to make frequent runs forward and support the attack with crosses.

These two players need to be quick, skilled and confident to take players in a 1v1 situation as well as provide accurate crosses to the forwards.

These positions will have Medium-High defensive responsibilities and will be required to track back and defend as soon as the attack is over. 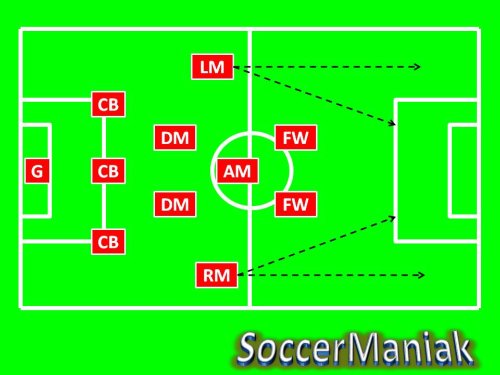 The attacking midfielder of 3-5-2 soccer formation will have the freedom to go anywhere on the field.

Player in this position will have great vision of the field, read the game well, great ball control, exceptional passing and quick decision making skills.

Having a good shot from distance is a plus.

This player will want to make other players look good by providing passes for outside players (RM & LM) so that they can provide crosses for the Forwards.

Attacking Midfield player will be the key to Forwards goal scoring opportunities.

In other words Attacking Midfielder is there to help score goals by scoring himself or providing key passes for other players to score.

This player will have low defensive responsibilities although he/she will help the defense if the other team plays a more attacking soccer outnumbering the defense. 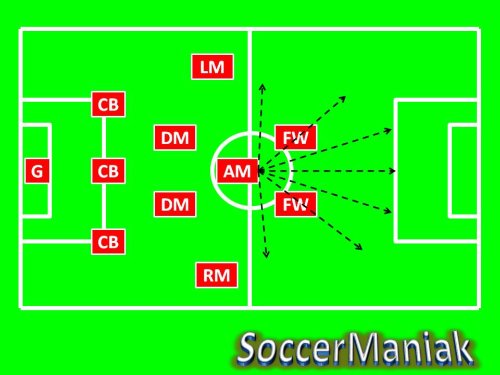 Two center midfield players will play a more defensive role and control the midfield by disrupting the opponents attack.

Their movement will consist of going about 20 YDS/M inside the opponents half to show support to the attack by giving option for a pass back.

They have to be good in the air and great at defending 1v1.

Defensive midfield players are strong and physical players not afraid to tackle hard.

They have to be calm when the ball is passed to them and they need to have solid passing skills.

Their job in this soccer formation is to simply protect the defense and stop the attack before it reaches the Center Backs. 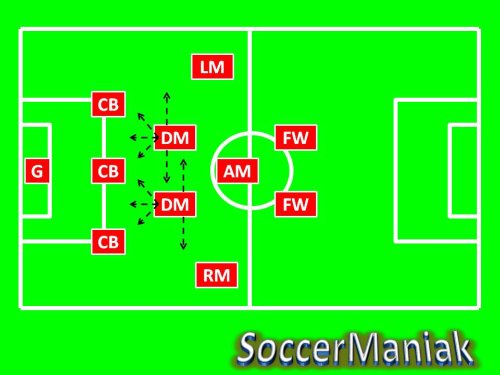 Three Center Backs in a 3-5-2 soccer formation are there to defend and stop goals from coming in.

These players have to be great at reading the game and defending in 1v1 situation.

Center Backs need to communicate and learn to incorporate the offside trap whenever possible. This does not come on its own but through practice and constant verbal communication.

If the offside trap isn't working, than one of the center backs will drop back making him a Sweeper of this formation.

Any defense can be great but the key ingredient in great defense is the communication between the defenders to close down all empty space and opponents players.

These three players will command the 2 Defensive Midfield players in front of them.

The most important aspect of coaching 3-5-2 soccer formation is for midfield to have endurance and speed.

Quickest players on the team will take the outside (LM & RM) positions. Practice crosses and 1v1 situations with these players.

Strong, tactical and positional sense players will want to be put in the Defensive Midfield positions. Work on air balls and 1v1 defending with these players.

Attacking midfield player will be the one with passion to score goals and somehow gets the most touches on the ball when practicing.

This player needs to have all the attacking traits such as passing, vision, great ball control, dribbling etc.

The best player on the team is usually given the attacking midfield player role.

Forwards are there to score goals and win games. They have the freedom to go anywhere and shoot from any chance they get.

Every time there is a cross inside the penalty box, both Forwards need to be there to attack the ball.

Forwards need to take chances and shoot any time they can.

Communication will be the key to success with every formation. Players should always talk on the field.