3-4-3 Soccer Formation is one of the formations that provide very offensive and attack minded system of play.

This formation in soccer can be very dangerous to play with if the team is not well organized and it should be practiced a lot before the season starts.

3-4-3 system of play should only be used if the opponent is playing with preferably 1, at most 2 attacking players.

Teams that use this soccer formation effectively are usually mature teams with a lot of zonal system experience.

The strength of 3-4-3 Soccer Formation comes from the midfield and forward line.

The weakness is the 3 man defense.

Defense will be helped by one central midfielder at all times, however the key for defense to work well in any formation is constant verbal communication. 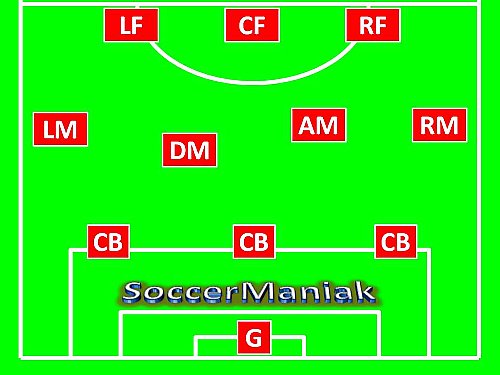 Defense of 3-4-3 Soccer Formation will consist of 3 Center Back Defenders spread out in a flat line across the field.

These three Center Backs should be tall, strong and very good in the air.

Center Backs will need to be good at defending in 1v1 situations and their verbal communication needs to be at its best because they are the backbone of defense.

Communication will ensure that all empty space is closed down by communicating with the players in front of them and telling each other where to go.

Another important aspect of great communication in defense is for offside traps.

With great verbal communication the team will move up in sync when the ball is played behind catching the attacking player in offside position.

Center Backs can quickly convert into playing with a Sweeper role, meaning one CB playing 5 - 10 YDS/M behind the other CB's.

Sweeper role formation is used when the opponent has some attackers that keep running behind the defensive line causing problems because of their speed.

Sweeper will take care of that hole in defense by simply stepping behind the Center Back line gaining advantage of doubling up on players and clearing all the balls that make its way behind.

Defensive line will not have any offensive responsibilities except for going up for dead ball situations like free kicks or corners, because of their heading threat due to their size.

One more important thing to mention when playing with 3-4-3 soccer formation is to close down space between defense and midfield.

Midfield and Defense should not be more than 20 YDS/M apart on the field. 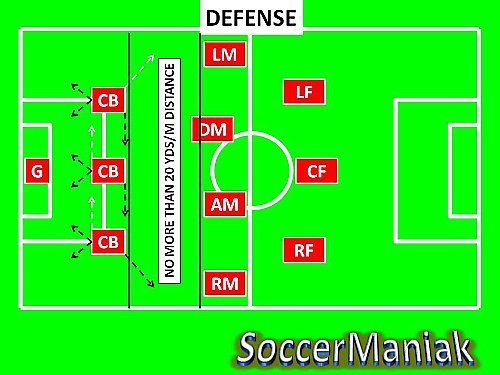 The outside players RM & LM of this 3-4-3 soccer formation will need to be in great conditioning shape because they are supposed to join every attack by overlapping the forwards and than crossing the ball inside the penalty box than tracking back to defend once the ball changes possession.

Their ability to take defensive players 1v1 and cross the ball is crucial for this formation to work well.

This is where this formation shows the most danger as 5 attacking players find themselves around the penalty box looking to score from crosses.

Center Defensive Midfield player, also called a Holding Midfielder will play a more defensive role and control the midfield by disrupting the opponents attack and also connecting the defense with offense by being the start of most attacks.

They have to be good in the air, great at defending 1v1 and have the ability to read the game.

Defensive midfield players are strong and physical players not afraid to tackle hard.

They need solid passing skills and the ability to stay calm when the ball is passed to them because they will act as connectors between defense and attack.

Their job in this 3-4-3 system of play is to protect the defense and stop the attack before it reaches the Center Backs.

This 3-4-3 formation in soccer will turn into 3-4-3 diamond formation when attacking due to the second more offensive minded player in the midfield who will look for the opportunity to go up the field and help the attack score whenever possible.

Player suited for this position will often be the player that gets the most touches on the ball during practice.

This player needs to want the ball the most out of all the players on the field and will somehow find the space to receive the ball most during practice.

Having a good shot from distance is a plus.

This player will want to make other players look good by providing passes for outside players (RM & LM) or forwards so that they can provide crosses or score goals.

In other words Attacking Midfielder is there to help score goals by scoring himself or providing key passes for other players to score.

This player will have medium defensive responsibilities and will need to be in great conditioning shape because of helping offense and defense throughout the soccer match.

Attacking Midfield movement will consist of playing in the middle of the field from his/her penalty box to the opponents penalty box. 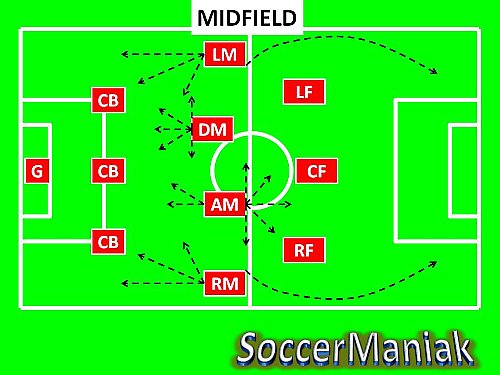 The attacking trio is very important for this 3-4-3 soccer formation to win games.

It will consist of two wide forward players that are usually very quick and great at 1v1 situations against defenders.

They will need great ball handling skills and crossing abilities.

The wide players will open up space for the midfield by running wide and toward the sidelines or simply running inside and creating space for the Outside Midfielders (RM & LM).

Forward players will need to find themselves inside the penalty box on every cross and their job is to simply score goals any way possible. 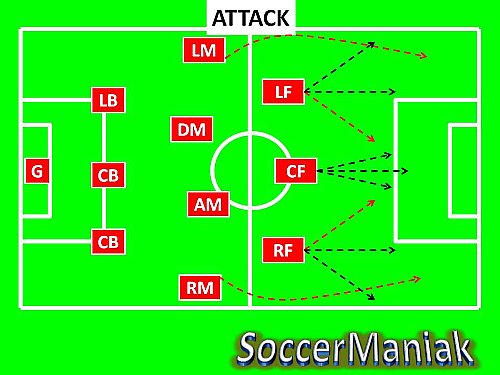 This 3-4-3 soccer formation is very effective against other systems that play with 3 or 4 defenders such as 4-4-2 formation.

The most important thing to learn when playing with 3-4-3 soccer formation is to have players move and not stay statically when attacking.

Midfield will run inside, forwards will spread to the wings, outside midfield will overlap side forwards and come forward etc.

When defending, this formation is best to defend with zone defense. Players need to learn to communicate and close down space without chasing the soccer ball.