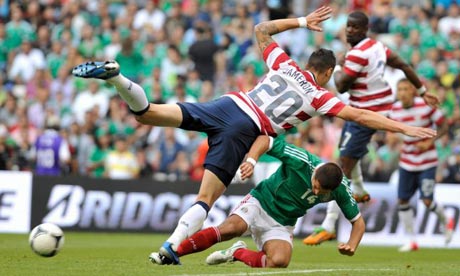 Mexico Soccer History Dates Back to 1929, When Mexico Became One of the First Soccer Nations to Become a Part of FIFA.

Surprisingly, Mexico soccer history is not as rich as many other Central and South American Countries.

Mexico was one of the first Nations to be part of FIFA, having the first Mexican National Squad formed under Federacion Mexicana de Futbol Asociacion (FMFA) in 1929.

Mexico finished the tournament in the last place with all defeats.

Next 40 years (1930-1970) of Mexican soccer went by with no real success in making soccer as popular as it is today in Mexico.

During this period of Mexican Soccer History, professional leagues suffered from corruption, match fixing and very poor conditions for players to train in.

During the first 5 World Cups, Mexico was not even considered a tough opponent, losing all of their games and recording only one win against Czechoslovakia, in 1962.

This period of Mexican soccer history is considered to be "the dark ages of soccer".

1970 World Cup changed the scope of how soccer was viewed in Mexico, while the popularity of soccer in the streets of Mexico grew exponentially.

Mexico was the host for 1970 World Cup, making this one of the more important stages in the history of Mexican soccer development.

This World Cup marked the first tournament where Mexico showed competitiveness and was considered a tough opponent in the tournament.

Mexico managed to reach the quarter finals of the 1970 World Cup, showing skills and competitiveness throughout the tournament.

This marked great success for Mexico, and even though they were eliminated in the quarter finals, the popularity of soccer grew with every Mexican kid wanting to play this sport after the World Cup tournament was finished.

1970 World Cup was a major positive influence for the history of Soccer in Mexico and the years to come, showing much promise and rise of popularity among the Mexican people.

Being a successful host of the 1970 World Cup, Mexico was awarded the honor of hosting the 1986 World Cup.

This World Cup is perhaps one of the most fun to watch World Cup Tournaments to date.

By this World Cup, Mexico soccer popularity had grown drastically and soccer was already considered the number one sport in Mexico.

Having a great National Squad for the 1986 World Cup, Mexico was considered by many to be one of the favorites to actually win this years tournament.

That dream never realized as Mexico was eliminated once more in the Quarter Finals by West Germany.

Despite not having great success in the World Cup, Mexico is still producing world class players and is considered a tough opponent in tournaments.