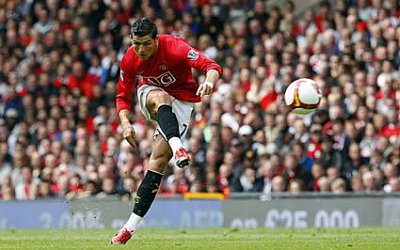 Soccer shooting technique is not something that comes quick. Repetition with soccer shooting drills will improve the players shooting skills with the ball.

Soccer shooting tips listed here will help with learning the correct technique for approaching and striking the soccer ball with intent to get the pace and precision.

Soccer shooting skill takes time and many repetitions to develop. Reading this article will give you the information so that you can apply it in training to slowly start building the positive habit for kicking the soccer ball.

Professional players seen on TV, controlling and striking the soccer ball with pace and accuracy effortlessly, have spent countless hours in training from a very young age, to get to where they are today.

Practicing different ways to shoot the ball is great, however training with the wrong shooting technique will become a habit, leading to worse shooting or passing ability in the future.

For training to pay off, player needs to incorporate the correct technique, for the brain to remember and turn into a habit performed in the games.

Repetitive Training will cause the brain to remember body movement when shooting, allowing the player to act on instinct when playing in a fast paced competitive game.

Players who train with both feet will be twice as hard to guard.

Start training the opposite foot in practice, or scrimmage games. Just force yourself to play with the weaker foot, and with time, you will be surprised at how skillful that weaker foot can get with repetitive practice.

Training and forcing yourself to play with your weaker foot may be hard at first, but after a little time weaker foot will improve more and more.

Guarding somebody who always goes to their dominant side is easy, but players who can use both feet can attack, shoot or pass the ball from either side.

Attacking players need to have attempts on goal. Sometimes they need to be selfish in attack and take opportunities on their own. Look for an opening and try to score is the main goal for attackers.

There are other skills with attacking players when they need to keep the ball, or create an outlet to relieve defense, but when they get the ball around the penalty box, first instinct should be to find space to shoot and cause danger for the opponents goal.

Good practice for young players is to have a number of attempts on goal they want to have in each game. More attempts will lead to more goals. Players complicate things very often with dribbling and faking the shot. Just shoot and try to score when in position to do so.