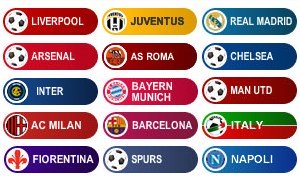 Best Soccer Clubs that we love and follow week in, week out.

This part of my website will be reserved for the top soccer clubs in the world.

I am excited to get started on doing research and putting together the list for best soccer teams in the world, past and present.

I will try and find as much information as I can for this list of famous soccer teams; including team history, championships won, wallpapers, great moments in that teams history, players that made a difference in those clubs etc...

If you love soccer, than you must have a favorite soccer team for which you are very passionate about.

The list for great soccer clubs is quite long with teams from Europe, South America, USA and other parts of the world.

Soccer nowadays brings a smile to many kids and peoples faces, as the game grows to #1 sport in every corner of the world.

Some countries are still a little behind in soccer development, USA being one of them, however soccer is like an epidemic and keeps growing faster and faster in all countries still catching up to all the soccer hype.

Without a doubt, every country is catching up to this sport, and I am sure that in the near future soccer will become the #1 sport in every part of the world.

There are so many soccer teams that have been around for more than 100 years. These clubs have developed the following of faithful fans watching every game during the season, and supporting their teams by buying team jerseys, scarfs, flags and other accessories,

Fans have made this game more interesting, while the technology has made soccer a multibillion dollar industry.

Best Soccer Clubs around the World spend millions of dollars every year bringing new and well known players into the club.

Player salary is one major part of this game that grew drastically over the past 20 years, allowing professional players life of luxury through multimillion dollar deals for their soccer skills.

No matter which way you look at it, every soccer club has a fan base who follow their team in different leagues.

Soccer Clubs in Europe and around the world usually have a nickname for their fans.

Fans make this game more fun, and the more fans that show interest in any club, the more success and money that club tends to attract.

World soccer teams give us entertainment, and without the fans to support the game, soccer would not be where it is today.

Browse through different teams listed below and come back to visit my webpage regularly.